Well the boys are curled up in tight little balls with very sleepy eyes, rain has arrived and the start of the storm that has been promised.  Before it came though, we wrapped up warm and we got out on our mountain bikes for a bit of a blowout. Filled with the flu for the last couple of weeks I figured it would either cure me or kill me.  Stephen laughed at how much clothing I planned to be wearing on this ride – but with a head full of flu I wasn’t taking any chances. Even had long tights with me – haven’t worn those since living in Queenstown.

We headed towards Greymouth and then slightly inland to Notown. This is an old gold mining area now used for forestry just north of Greymouth as you head inland towards Reefton.  Today’s plan was to keep it a reasonably flat ride but reasonably long ride.   It is usually a nice ride up the valley – heading towards Nelson Creek. We’d attempted it before but that was after already doing a climbing loop.   I figured I could ride for a while but with being all clogged up wasn’t that keen on tackling any real hills today. I didn’t think I could cope with any real hill climbing or more to the point, thought I might have a bit of trouble with the breathing…..  The boys were ready though – we’re all in need of a good blow out.

mountain biking Notown, forestry block in the back of Greymouth, West Coast, NZ

Ok, so we arrive at our car park point and notice that the road heading up the valley that we were going to take looks like it’s in heavy use with trucks. The forestry signs are up basically warning of logging trucks, use your lights etc. Also a container has been parked up at the “car park” so it didn’t look good. We sat there for a minute or two – thinking drat! Having the dogs with us we didn’t really want to be biking up there if there were going to be heaps of trucks coming and going. Option B……….. the usual hill climb loop. This involves a lot of climbing. What are our options – go somewhere else, but where. Couldn’t really be bothered driving anywhere else. Ok, girl, hill climb it is. So that’s what we did.

I figured ok, it’ll be slow, I’ll have to stop a lot but whatever – gotta be good for me right! The two of us got changed and again Stephen laughed – especially now we were going to be doing all this climbing. You are going to roast! Don’t care, I will not be cold. Well of course, since we stop every now and then for Mr photographer, I was pleased I had warm clothing.

After a couple of photos near the start, we were off proper, slowly meandering up the valley. It starts with a gentle incline, just enough to know that you are steadily climbing. Stephen had forgotten how it is straight into up! We take it easy, the boys darting ahead their noses catching all the lovely “outdoor” smells. After about 3kms the hill climb starts proper. We both drop into lower gears and prepare for the grind. It starts out reasonably steep – I follow one pedal stroke with another, keeping an even pace and trying to breathe easy. We’re doing ok, just taking it slow. Stephen comments on the growth of the pine trees. The first time we came up here together – nearly 7 years ago, the pine trees had just been planted so the views down the valley were spectacular. Now the trees are too tall and you can’t see out until there is a clearing. 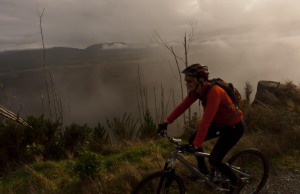 Pretty happy with our progress, just one stop to “clear the nose” and we eventually meet the road junction that would normally take us on our usual loop. The trees have cleared here and you can see right down the Grey Valley heading towards Lake Brunner. The sky is very moody, rain is forecast for later this afternoon so the cloud formations are fantastic. Stephen suggests we go straight ahead for a change and see how things are looking at the top of the ridgeline. We tried to go this way many years ago but it was in the middle of being logged and you couldn’t go anywhere. Of course, it meant more climbing……

It did plateau at the top and you could see off towards Greymouth, Blackball, round to Lake Brunner and Nelson Creek – fantastic views and fantastic moody skies. I had got a little warm on the climb up but not hot enough that I felt the need to lose a layer, just a matter of downing the zipper a little and rolling up the sleeves.  Still definitely happy I had my tights on for full leg cover up. 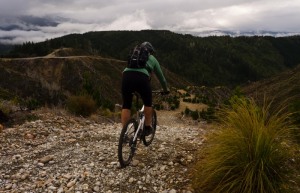 By the time I had climbed to the plateau, Stephen seemed to have disappeared, along with the dogs.  Always my faithful friends, Ziggy and Nico soon appeared to show me the way to where Stephen had gone.  There are numerous logging roads heading off from the plateau, following different ridgelines.  Stephen had taken one of these and was waiting at the top.  After making some adjustments with the camera and giving me a quick photography lesson (with a photographer in the house I’m not trusted with the camera very often!), Stephen tackled the ridgeline track – straight down.  From the top it looked pretty steep and going by how carefully he manoeuvred his way down, I’d say it was very steep.  I always wonder how on earth the logging trucks and machines make their way around these hills.

Stephen eventually reaches the end of this logging road and gives me a big wave.  Now, the fun part, me and the boys sitting at the top, while Stephen has to negotiate his way back up.  A telling tale of how steep this track is, is to watch Stephen WALK back up.  He attempts riding his bike a couple of times but doesn’t get far before he has to succumb to walking again.  Even the walk looks tiresome and a grind.  The track is nice loose rocky gravel so I’m sure that isn’t helping together with the steepness.  The dogs and I are happy to look on and just wait and eventually Stephen appears with just one section of the climb left to reach us.  He is a happy camper by the time he reaches the top.  Oddly though, he is beaming.  “Did you see that – how steep was that, that was a blast”  he says – worth the climb back up.  mmmm rather him than me!

Onwards again and eventually we come to a split in the road.  We think we can see the main forestry road way down the bottom and feel sure that this track is going to lead us there.  It is an exciting prospect to think we may have another loop option when we come up Notown.  We head off – Stephen in the front as usual with the dogs in tow and me lagging at the back.  It meanders round gently before heading into more of a downhill track.  It gets quite steep and loose in places and with having the flu I’m not feeling that confident with my sense of balance so don’t take any of my usual risks.  I know I can ride it but play it safe for the real steep bits.  The track is a bit overgrown in some sections and you have to watch for the bush lawyer and gorse bushes hanging over the track.  They do their best to “get you”.  Thank goodness for full finger gloves! 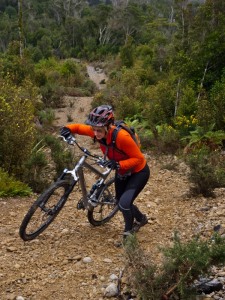 Well…… unfortunately that’s it, the trail has ended.  Absolutely gutted to say the least!!!!!  We had come a long way down from the tops and it seems like we can almost just reach out and touch the bottom.  We thought for sure we were on the right track.  Blast, drat, darn, ……. and all those other good words for situations like this!  So close, oh so close…… So, yep, we’ve got to turn round and go back up.  The thought is very daunting but has to be done.  Off we head and surprisingly enough it isn’t as bad as we think.  Most of it is ridable with only a couple of short sections that are just too steep and loose to ride – almost too steep to walk!   Back to the top and we’re ready to meander our way back round to the road junction again.

It is a nice easy meander before we start heading back down to the car, the same way we came up. 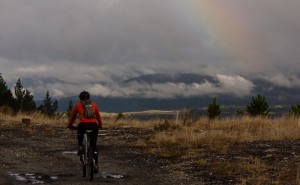 This is a nice surprise actually.  We knew we were climbing going in but when you head back out the same way it can be quite rewarding seeing just how much climbing you did and how steep it was in places sometimes – and we stayed on our bikes and rode it all!  Well done us haha!  Didn’t quite get our timing right though unfortunately and some drizzle starts to come through.  Our intentions were to get out before rain came in as it had been forecast for later in the afternoon.  We weren’t quite as organised as we’d hoped and were a bit later heading off than had anticipated.  Thankfully though we were prepared and had our rain jackets at hand. 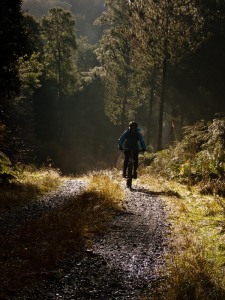 The drizzle didn’t last long and as we were now going downhill the trip out didn’t take too long either.  Before we knew it we were back down at the flatter section and back at the car.  The sun even poked back through for us for the final kilometre or so.  Back at the car, warm clothes, and the heater on heading for home.  All in all a great day out in the hills in the back of Greymouth – a fun-filled adventure and the boys are ready for a well deserved sleep.