Climbing High – on a Mountain Bike! 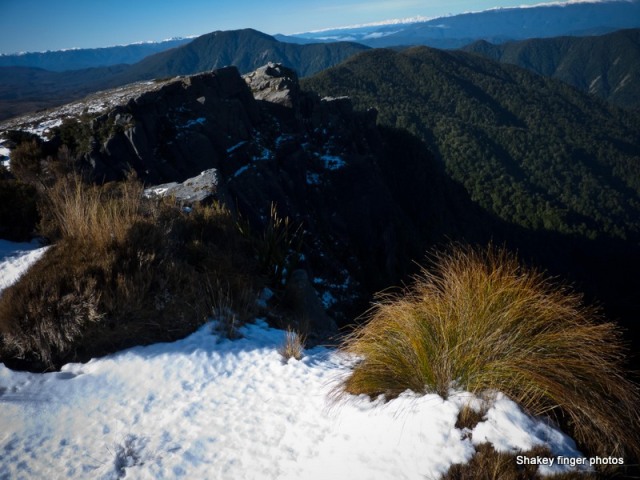 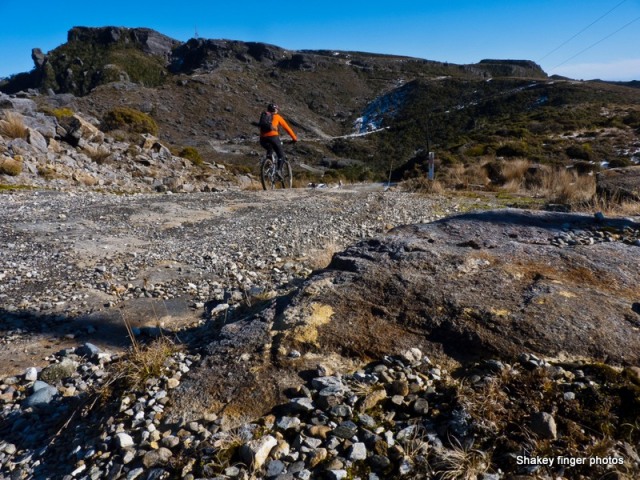 Just home from a mission ride.  Denniston plateau was the starting point of today’s mountain bike adventure – 600 metres above sea level and 25 kms north-east of Westport.  Our goal was to climb to the top of Mt Rochford on the Papahaua range (named after John Rochford, an early surveyor from the late 1850s).  It is the home of the Mt Rochford communications tower – we think a repeater station, cellphone, telephone etc – on checking, no-one was really sure!  Guess we were about to find out….. 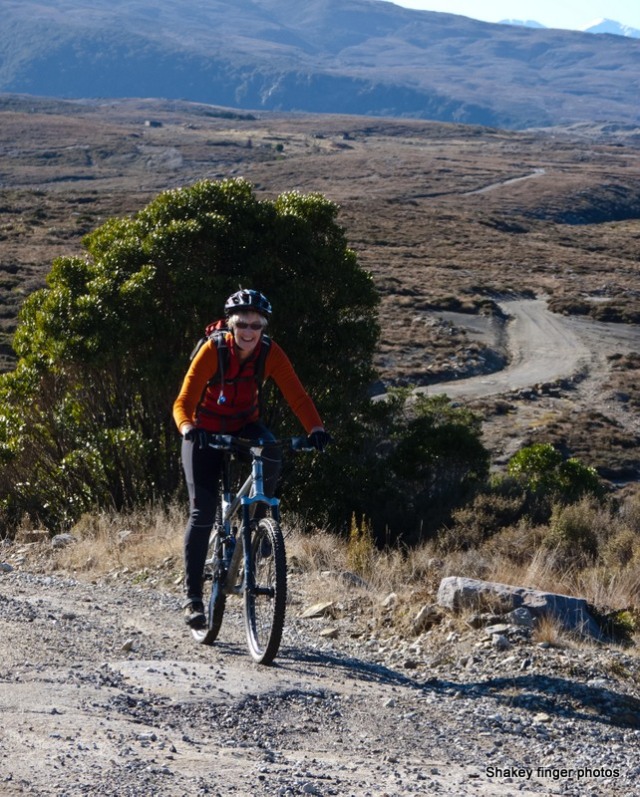 Our rendezvous point was the Friends of the Hill Denniston Museum.  We were meeting up with Shaz and Ren, a local couple from the mountain bike fraternity of Westport.  Typically we were running late so Shaz and Ren were patiently waiting when we finally arrived.  Stephen, Shaz and Ren started the ride from the museum while I carried on up the road a bit further.  Nico and Ziggy, our dogs were with us and we wanted to try to keep them off the bottom road as much as possible as if any traffic, this is where the vehicles would be going quickest. 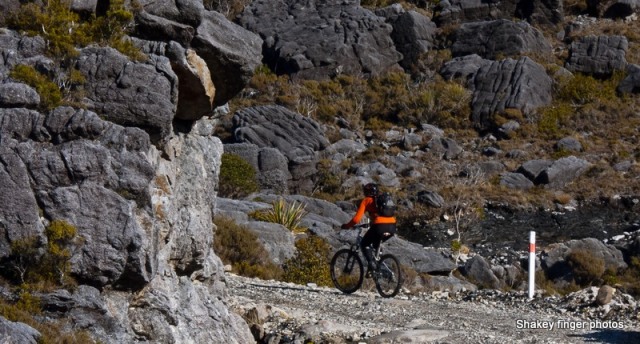 It is a sealed road up to the Denniston Plateau but then changes to a gravel access road for the remainder to the top of Mt Rochford.  Now I say gravel….. more like slick rock and coal face type material.  It is a popular track for 4WD vehicles as it gets quite technical and steep – yes that is for 4WD vehicles, so just imagine what it is like for someone on a mountain bike.   aaaahhhhh – we had a challenge ahead of us. 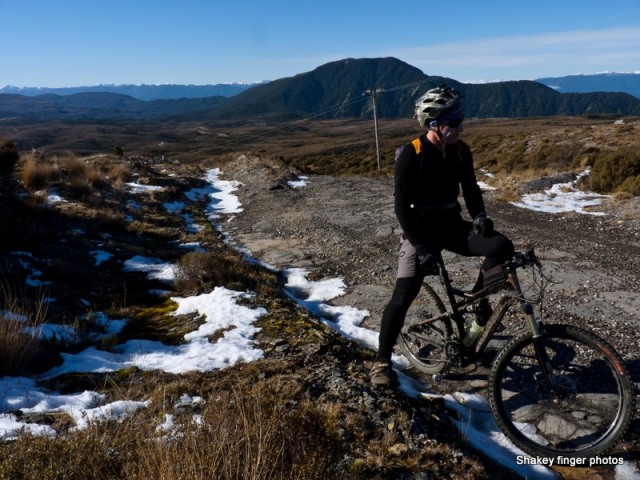 It was a stunning day weather wise – clear blue sunny skies.  Mid winter though and there had been snow only two weeks earlier so it was pretty cold.  Given our starting altitude and that we were going to be climbing even higher, we needed to wrap up warm.  The wind chill factor was probably the worst.  Due to the snow fall of late, it also meant we were going to strike snow and ice on the track at some stage – something to look forward to! 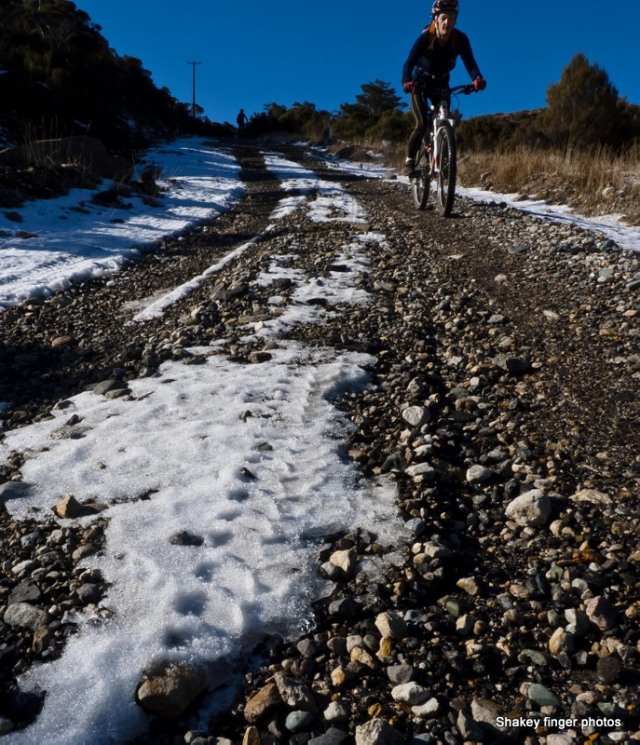 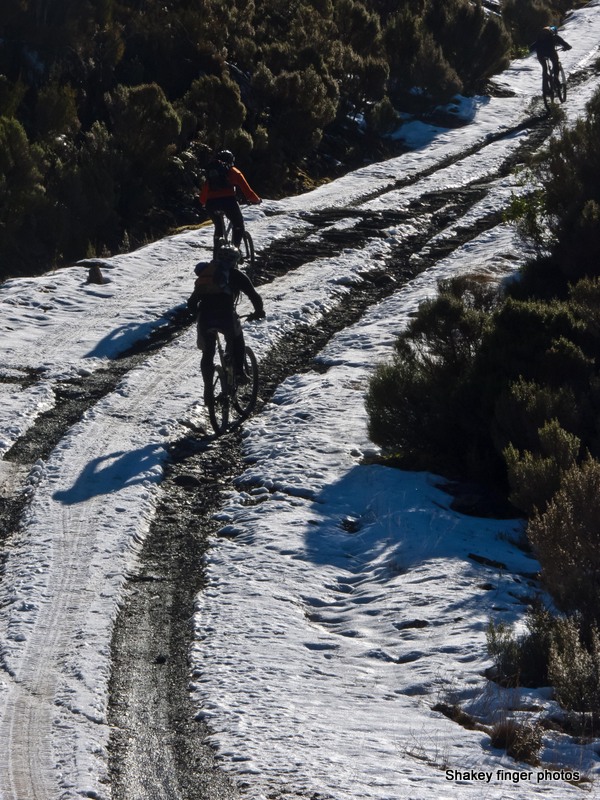 Grinding it out on our Mountain bikes in the snow, Mt Rochford, West Coast, NZ

This is a great climb – meandering to start, then a couple of short steep sections, a long grind and then, of all things, a downhill – what!  Meander around again and restart the climb. 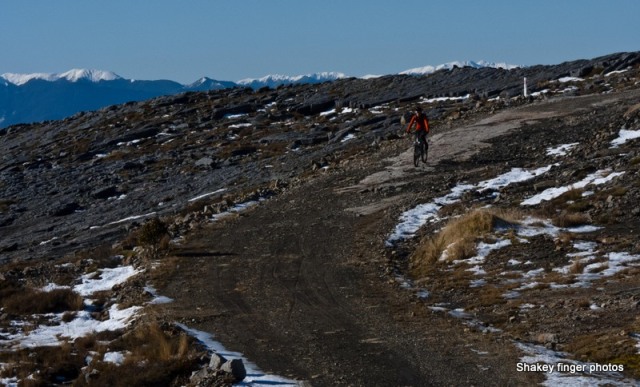 It is because of this that you look at the tower at the top of Mt Rochford from your starting point at the plateau and think “not so bad, doesn’t look too far away”, then you go up, up, up, only to go down, before climbing up again – couple of false tops but definitely worth it for the views. 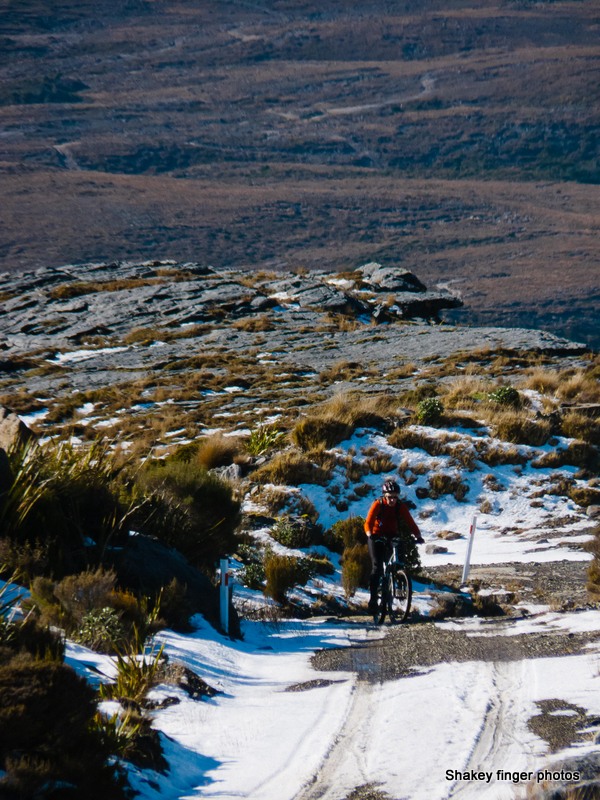 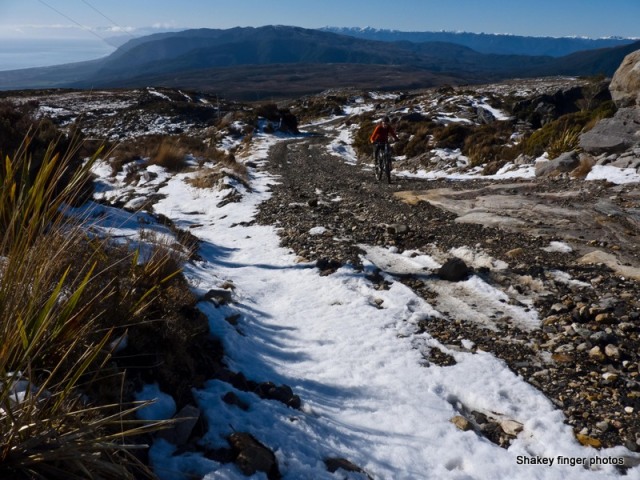 Ren and Shaz tell us many of the Westport mountain bike crew do this ride as a training ride pre events.  I can certainly see why – it is an awesome workout.  Stephen gets plenty of photo opportunities with me lagging as usual at the back.  Amazing though looking back where we’ve come – you can see the road winding its way up the mountain – go us!….. we’ve biked that! 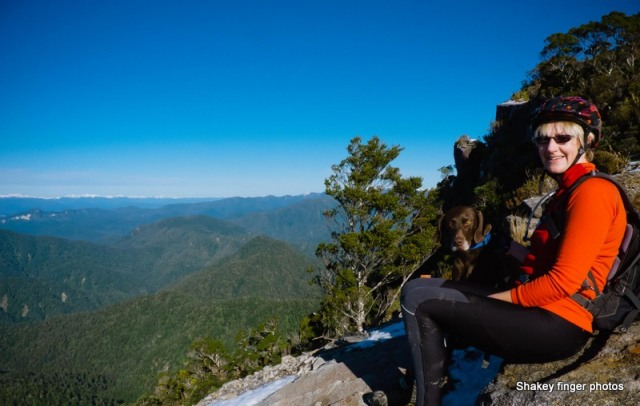 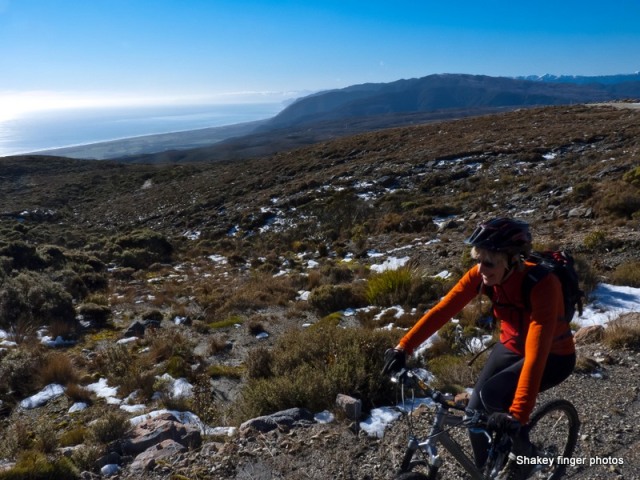 The views up here are out of this world – honestly!  Stephen makes the comment that this would have to be one of the prettiest rides he has ever done.  We’ve got stunning weather, great company and views to die for.  Westport and the Tasman Sea are off to one side, the expanse of the Papahaua Ranges out the back, and to the north West, we’ve got views heading out towards Karamea.  We are absolutely surrounded by some of the most amazing New Zealand scenery. 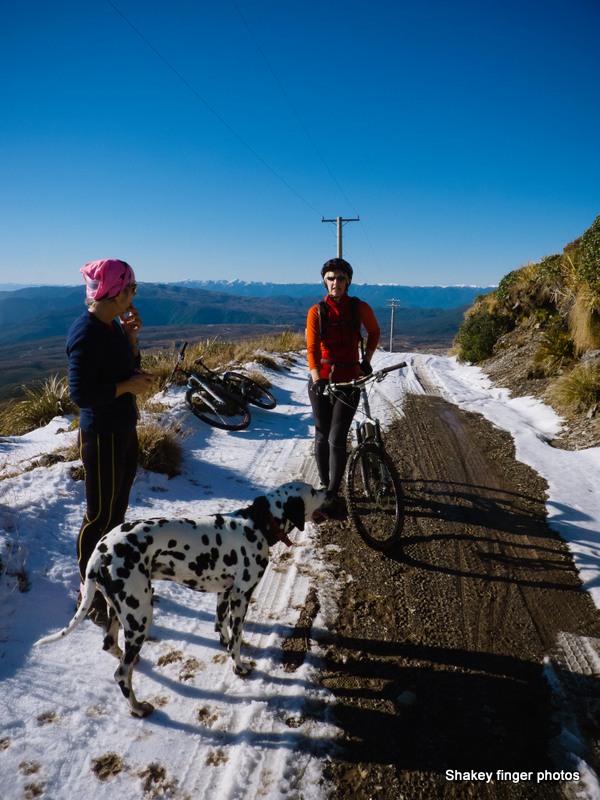 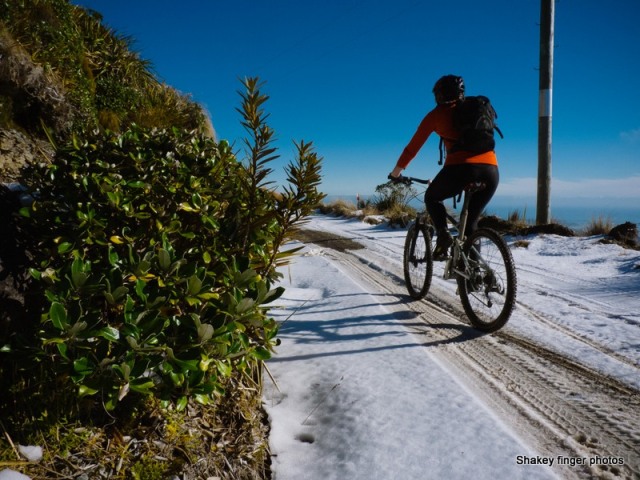 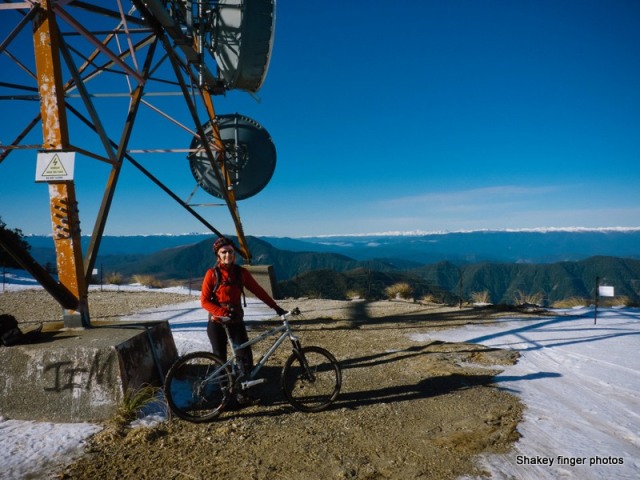 Wahoo, finally we make it to the top and we are welcomed with open arms (!!) by the communications tower.  This thing is HUGE!  Again, the views are outstanding – 360 degree.  We don’t linger for long though – pretty windy here as it is quite exposed on the tops.  Time enough for a quick bite to eat – a compulsory photograph – we made it!, and then an extra layer of clothing before we tackle the downhill.  It is going to be tricky in places due to the snow but it all adds to the fun of it. 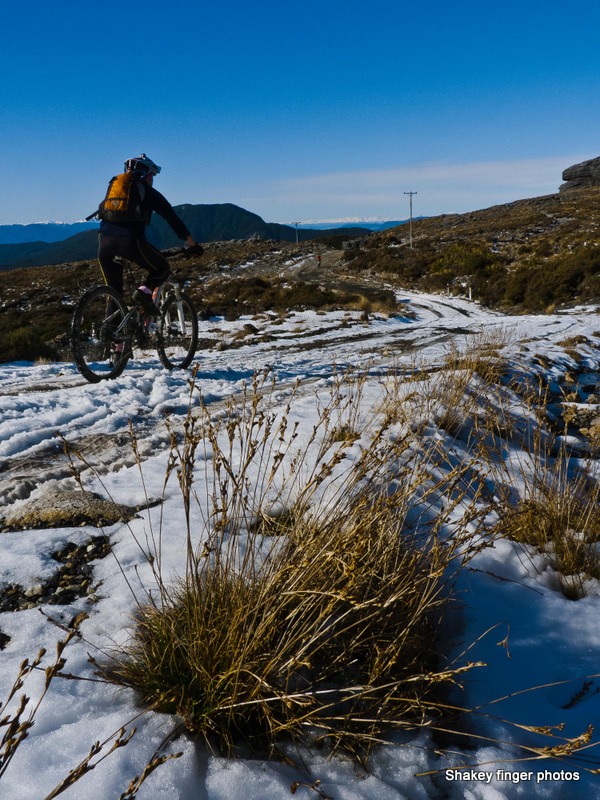 Doesn’t take long and we’re back at the vehicles, loaded up and ready for a well deserved cuppa.  Thanks heaps to Shaz and Ren for sharing their backyard with us for the afternoon. 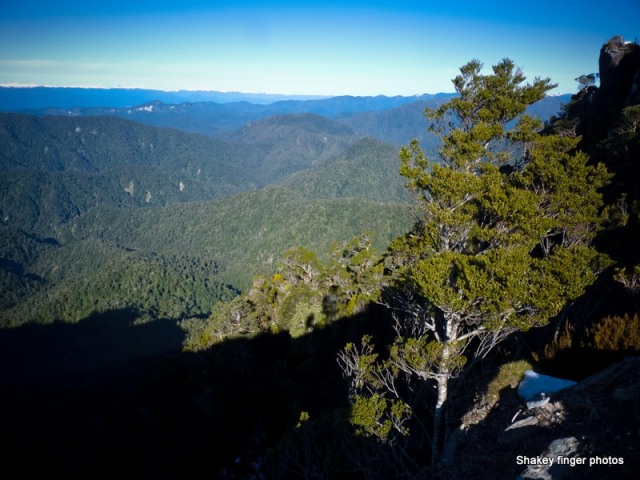 Jan and Stephen run Breakers Boutique Accommodation on the Punakaiki coastline, north of Greymouth.  They are out and about exploring the many wonders of the West Coast as much as possible.  For some recommendations on things to see and do while visiting the West Coast check out their activities page.

Jan and Stephen live on the Punakaiki coastline, north of Greymouth on the West Coast, NZ and run Breakers Boutique Accommodation. They both enjoy the outdoors and are passionate about things to see and do on the West Coast and would like to share their experiences with you.
View all posts by coastingnz →
This entry was posted in Nature, NZ flora and fauna, NZ history, photography and tagged Denniston, Denniston plateau, mountain bike adventure, NZ mountain biking, NZ photography, outdoors, snow, west coast mountain biking. Bookmark the permalink.

6 Responses to Climbing High – on a Mountain Bike!